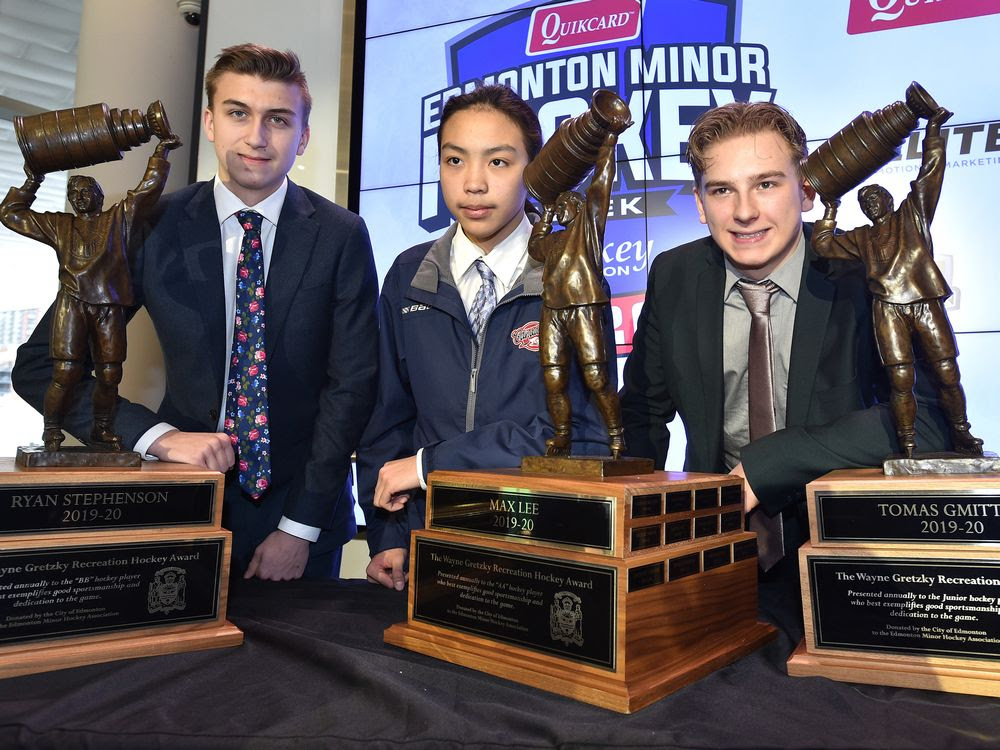 Ryan Stephenson, Max Lee and Thomas Gmitter appear to have bright futures even if hockey does not work out as a profession.

The three Wayne Gretzky Award winners as part of Quikcard Edmonton Minor Hockey Week are all heavily involved in the community, and all exemplify the qualities required to earn the prestigious annual award.

The trio were presented with their impressive trophies on Wednesday, within reach of the Gretzky statue adorning the entrance of Rogers Place.

“It’s nice, but I don’t feel it’s about the trophy, it’s mainly to represent what the award stands for and be an inspiration to people who want to achieve their dream,” said Lee, 13, a Grade 8 student at St. Thomas More Junior High. “Right now me being here is part of my dream of being a hockey player. I hope me being here today can help inspire younger people to want to be better in the future.”

Lee is currently playing Bantam AA hockey with Think Green Alberta of the Canadian Athletic Club. He volunteers with St. Albert HockeyFit as an on-ice instructor for their Young Guns summer program.

“I was two when I got my first pair of skates and stick and I’ve been playing ever since,” Lee said. “I want to play hockey as far as I can make it, but for me, the biggest thing is education. School will always come first for me and if hockey doesn’t work out for me, I’d probably go in to the medical field and try and give back and help people.”

Gmitter, 18, is currently in his first year of neuroscience at the University of Alberta. He plays Junior B with the Beverly Warriors, who are currently at the top of the West Division standings in the Capital Junior Hockey League. He is also a volunteer coach.

“It definitely does feel good to be recognized for the things I’ve done, but I feel it’s almost better to teach a kid to learn how to skate and this is all just secondary to that,” Gmitter said. “Me and my dad have a hockey team that we coach. I do a little volunteering, not so much in the first year of university anymore, I have to focus on that, but next year I’ll anticipate getting back in the community and volunteering some more.

“I really enjoy coaching. You see the game through a different angle and you just get to help the next generation of hockey players and help them become good people.”

Gmitter has been playing hockey for as long as he can remember. He’s taken part in a number of Minor Hockey Week tournaments growing up.

“Minor Hockey Week was one of the first big tournaments that I won with a team, so that was pretty good,” he said. “It was my first year with that team and it was in Peewee or Bantam. It was just really fun and from that I made a lot of lifelong friends. It was really good. It was fun to play hockey just to play hockey and the winning was just a cherry on top.”

Stephenson, 17, has also won the tournament in the past. He is currently in Grade 12 at Ross Sheppard High School and plays Tier 1 Midget with the Northeast Zone Rebels.

“I feel honoured that I was chosen for this award, because not many people get this chance,” Stephenson said. “I’ve been playing since I was four years old and I’ve always enjoyed it."

Manage your identity from the palm of your hand to the top of your desk.